Nevada is second only to Alaska as having the most mountain areas in the continental United States. Three of the 14 nationally designated wildernesses in the state of Nevada are near Austin. Young or old, whether your interests are hunting. biking, packing, photography or just taking a scenic drive through breathtaking county, these wilderness areas provide the ultimate in outdoor opportunities. 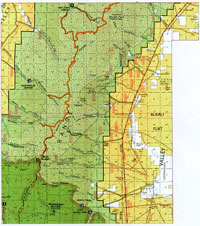 The Arc Dome wilderness area (click on map to enlarge) is the largest in the state, with 115,000 acres. Covering the southern third of the 125-mile long Toiyabe mountain range, it has three rivers and a myriad of small creeks, and streams. The Toiyabe mountains are the third highest mountain range in the state of Nevada. The Arc Dome crest is at 11,788 feet, the tenth highest summit in Nevada. The Arc Dome Wilderness supports a diverse ecosystem of flora and fauna. It is a backpacker's paradise with an extensive network of trails, providing fantastic sights of wildlife and terrain, and, from some of the higher peaks, to see as far as 100 miles in the distance. It's a one-of-a-kind experience.

The Toiyabe Crest Trail is the longest maintained trail in Nevada. It begins at the northeast corner of the Wilderness, leads along the South Twin River, Reese River and Big Sawmill Creek. It climbs to the crest of the range and follows the spine of the Toiyabe range 7 miles south of Ophir Summit, ending the 65 mile route in Kingston canyon.

Deer, elk, mountain lions, bobcats, coyotes and beaver are abundant. Big horn sheep are not as plentiful as they once were but herds can be found, especially near Twin Rivers and Jett Canyon. Chukar, Sage and blue grouse are common game birds. Golden Eagles, hawks and falcons also make their home here. Fishing is very good in the area waters; Lahontan cutthroat trout are native to the area, but you can also catch non-native species like eastern brook, rainbow and German browns.

The Toiyabe Range is also diverse in geologic finds. Plutonic, volcanic and sedimentary rocks are all present. Keen eyes will spot plant and animal fossils as well as an occasional arrowhead. Rockhounds will also find treasures in the variety of specimens.

Directions: Access to the Arc Dome Wilderness is from State Route 376 on the east side of the range, via county and Forest Service roads. Gas, groceries, and camping supplies are available along SR376 in Hadley, Carvers, and Kingston and along Highway 50 in Austin. Those planning to take the Toiyabe Crest Trail may want to arrange for pickup at the opposite end from where they start. 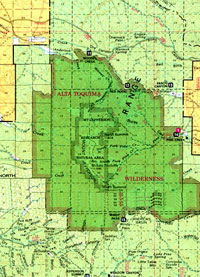 The Alta Toquima wilderness area (click on map to enlarge) is near the geographic center of the state and is made up of 38,000 acres. Situated in the middle of three wild ranges, it boasts dramatic, glacier carved canyons, tumbling creeks, and high alpine tablelands. From certain vantage points, you can see clear across the state of Nevada, to California in the west and Utah in the East. Mt. Jefferson, with its triple peaks, is the centerpiece of the Toquima mountain range with an elevation of 11,941 feet at the south summit.

There are over 50 miles of hiking trails throughout the area, most are only moderately maintained, making this a good area for those who seek solitude. Table Creek is a good place to see unique desert-alpine plants. Sage and grass cover the lower slopes, pinion and juniper wood the midlands, and lumbar pine make their appearance in the high canyons and hillsides. Creeks and springs add cottonwood, willow and aspens to the landscape.

Wildlife includes deer, elk, mountain lions and coyotes, as well as chipmunks and squirrels. Desert bighorns are making a comeback. Chukar and grouse are plentiful. Raptors, such as eagles, hawks and falcons are often seen soaring on the thermal currents above the canyons. Table Creek is a good fishing spot, with rainbow and brook trout.

The Alta Toquima is also the location of a prehistoric Indian village. The archeological site, discovered in 1978 on top of Mt. Jefferson, is the highest known Indian settlement in North America. Scientists believe the site was used 7,000 years ago as a hunting camp. Later, around 1300 A.D. a number of families made their home in a village there.

Directions: Access to the five Alta Toquima Wilderness trailheads is via Forest Service roads, off of US50 to the north and US6 to the south, and SR376 on the west side of the range. (click on map to enlarge) 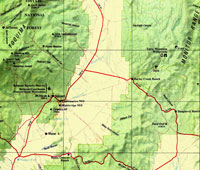 The Table Mountain wilderness area (click on map to enlarge) is in the Monitor mountain range. It is the third largest wilderness area in the state and hosts a large number of hiking trails. This wilderness is popular for horse packers and equestrians, with hikers and backpackers coming in a distant second. Nearly 115 miles long, the Monitor range is long and narrow. Table Mountain Wilderness straddles the range with 98,000 acres. At an elevation of 10,000 feet, Table Mountain is a 12-square-mile tableland.

The upper slopes boast large stands of quaking aspen and pines and juniper are joined by groves of mountain mahogany and cottonwoods at different elevations in this wilderness.

Table Mountain is well known for a growing, thriving elk population. The second largest bull elk ever taken in North America during the 20th century was taken in 1999 on Table Mountain. Scoring 425 3/8 points, the main beam of the elk's antlers was 5 feet, with 55 inches from antler to antler. Local licensed outfitters and guides have reported sightings of several more as large or larger, on the mountain.

Mule deer are abundant. Mountain lions, bobcats, coyotes and beaver are the chief inhabitants. Chukar, Sage and blue grouse are common, as well as the magnificent raptors; golden eagles, hawks and falcons. There are five perennial streams rambling though the Monitors, providing excellent opportunities for the intrepid fisherman to catch rainbow, brook, brown, and Lahontan cutthroat trout.

Directions: Access into the Monitor range and the Table Mountain wilderness is via dirt or gravel roads. While they are traversable by car, a truck or SUV is best. The wilderness is bounded by Monitor Valley Road (SR82) on the west, US50 on the north, and US6 on the south.

The Toiyabe Crest Trail runs 72 miles mostly along the ridges of the Toiyabe Range at elevations generally above 8,000 feet and contains slopes of 30 to 80 percent. The trail and its surrounding terrain average about 20 inches of precipitation per year with 90 percent of it in the form of snow.

The wide range of vegetation occurs along the trail. Limber Pine, Quaking Aspen. Curleaf Mountain Mahogany, Mountain Big Sagebrush, and Low Sagebrush comprise the upper vegetation story, with grasses and forbes providing the ground cover. The vegetation tends to be most dense in the wetter canyon areas.

Because the trail zone traverses some of the highest elevations in the region, it provides considerable scenic potential. High vantage points offer unobstructed views of the surrounding mountains as well as the valleys below. In addition to the natural landscape, occasionally one sees both historic and recent mining operations.

The Civilian Conservation Corps constructed the Toiyabe Crest Trail and its many "feeder" trails in the 1930's. Because of its early construction date, no set standards were followed during its construction. However, the entire trail has served well for both foot and horse travel. In many years with intense spring runoff some portions of the trail are subject to erosion.

The north end of the trail starts a half-mile south of the Kingston Guard Station. From Kingston Canyon the trail keeps mostly to the crest of the mountains southward for 343 miles to Ophir Summit. At this point the Ophir Canyon road cresses the trail. From Ophir Summit the trail continues south for about ten miles to Wardenot Pasture. Then it turns southwesterly around Arc Dome Wilderness Area. The last 29 miles of the Crest Trail is within the Wilderness Area. At the Junction of Big Sawmill Creek and Reese River, the trail turns southeasterly up Reese River for about five miles. At the Junction of Trail Creek the trail turns northeasterly for about ten miles, crossing the pass into South Twin River drainage to terminate at the road head on the South Twin River. Numerous "feeder" trails of variable standards and conditions are located along the entire length of the Toiyabe Crest Trail. These trails vary in length from one half mile to eight miles. They drop off into the canyons on both sides of the mountain range, and provide numerous access opportunities along the Crest Trail.

You should be prepared to bring water with you and plan on boiling and water you get from the streams because of bacteria found in the water. There are some rattlesnakes in the area. It is advised that you come prepared for any emergency. Central Nevada is remote and far from medical attention. Use common sense, be responsible for your campfires and leave your camp clean. You may camp anywhere on forest for up to 14 days per site.

It is hoped that this information had helped familiarize you with the conditions that you can expect to find along the Toiyabe Crest Trail. May your trip to our area be an enjoyable one and if you have any further question, feel free to contact this office at (775) 964-2200.